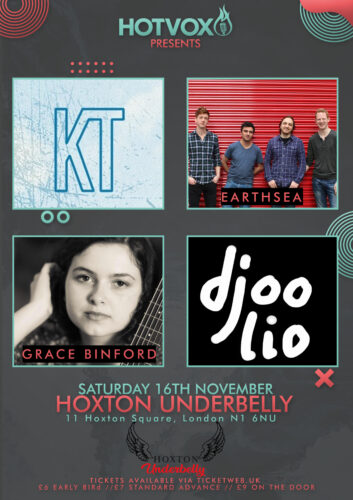 HOT VOX presents a night of live music at the effortlessly quirky Gigi’s Hoxton Underbelly. This venue has live music at its very core and is situated in the heart of Hoxton Square.

King Tides
https://hotvox.co.uk/artists/king-tides
King Tides are an East London band who bring with them a heavy Rhythm & Blues influence, accompanied by the ethereal and Lo-Fi wailing of guitar, saxophone, and vocals throughout.

With influences including Queens of the Stone Age, D’Angelo, and Red Hot Chili Peppers, King Tides offer an eclectic sound unlike anything you’ve heard before.

Grace Binford
https://hotvox.co.uk/artists/grace-binford
Raised in the wilds of central Kentucky, London-based singer-songwriter Grace Binford picked up her father’s for-ten-years-neglected guitar at age 13 and taught herself to play by ear. Having spent her childhood in classical piano lessons and in her parents’ living room listening to the likes of Joni Mitchell, The Beatles, James Taylor, and Crowded House, she began to write her own music as a means of attempting to process and connect with the world outside.

Named an old soul by many, Grace writes from a place of sharp-witted yet vulnerable reflection of human experiences, relying on intuition and sensitivity to craft her lyrics and melodies.
After playing her way around some of London’s most acclaimed venues for emerging singer-songwriters, Grace eventually formed a band to expand her live sound. She is currently preparing for her debut record, which will be released in 2020. soundcloud.com/gracebinford

Djoolio
https://hotvox.co.uk/artists/djoolio
Known for their intolerance to their 9 to 5 jobs, Djoolio play a catchy electronic pop-rock.
Their debut EP, Flat 41, has been released on Spotify in December 2019.
The best place and time to listen to their music, other than at live gigs, is a crowded bus at 8.45AM on a Monday morning crossing London Bridge.
They also don’t believe in long bios so see you at their next gig.