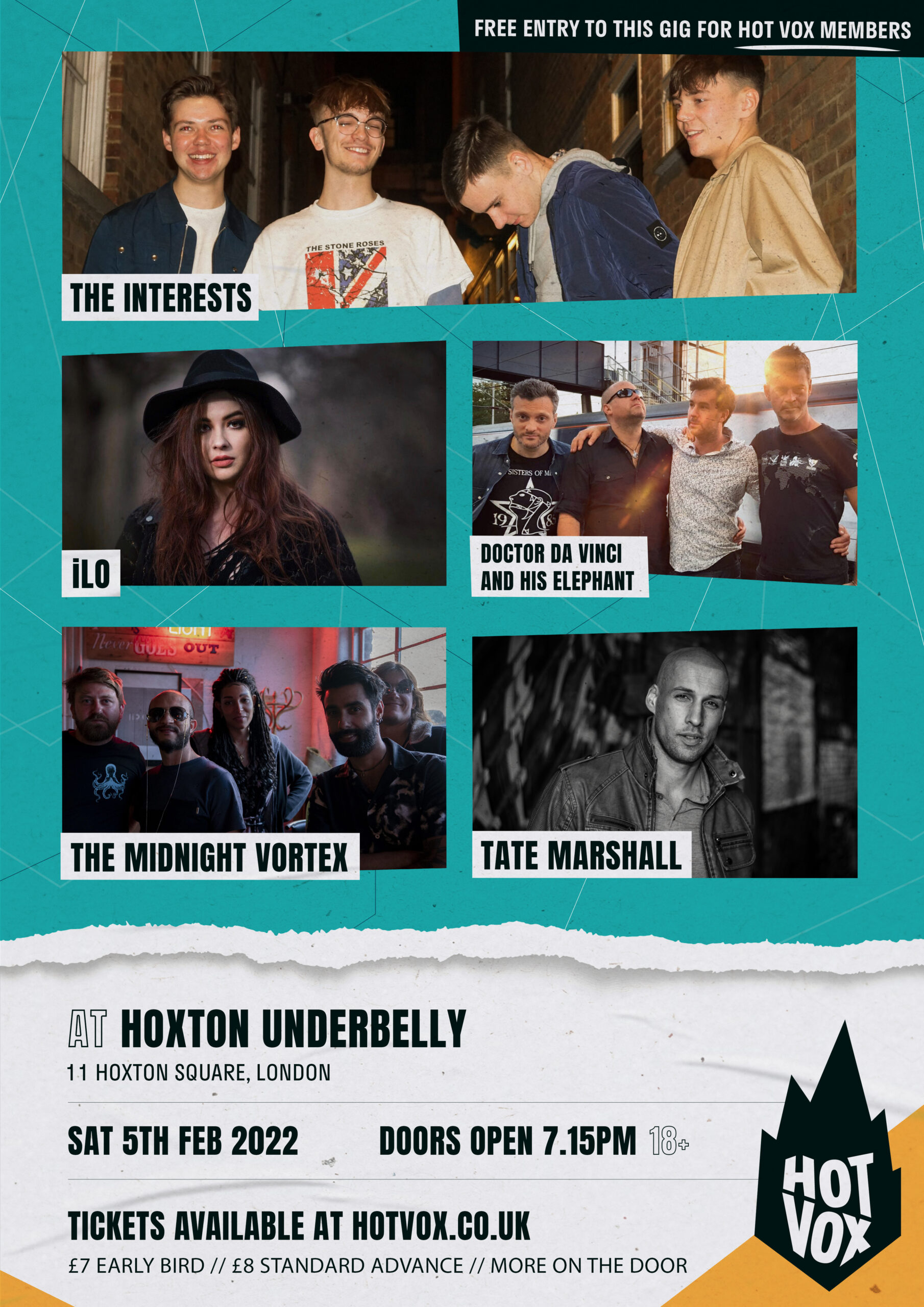 ON SALE: Already on sale

FULL ADVANCE INC. TECH SPECS: Will send to you closer to the gig

FULL LISTING BELOW AND ARTWORK ATTACHED:

Situated in the heart of Hoxton Square, Hoxton Underbelly is the effortlessly quirky stomping ground for those that love live music. Every week this venue plays host to some of the freshest artists on the HOT VOX roster.

From the depths of suburban South-East London, The Interests are a four-piece indie rock band who originally formed as a joke, which has now been taken a bit too far. Fast forward three years, and the band are already making strides in the industry. Rehearsing out of an industrial estate in Charlton, the band has gone and recorded their first songs at the prestigious Albion Rooms in Margate, with their debut single “Attention” (out December 3rd) being on of them. Once restrictions on events lifted in the UK in July 2021, the band hit the London gig scene hard, and have played at venues such as The Waiting Room, and the Shacklewell Arms and have a lot more planned for 2022.

iLO began her music career by meeting her manager Tony Moore (ex-Iron Maiden) by chance 10 years ago, and since then has released 2 EPs, headlined festival stages at Isle of Wight, Cornbury, Hyde Park BST, Black Deer, C2C, SXSW Texas, and Sweden Rock. She has enjoyed sold-out shows in NYC and Nashville, most notably at the Bluebird Cafe. She performed a residency in Las Vegas, as part of ‘The New British Invasion’, and sang at The House Of Commons and The US Embassy. iLO has supported Passenger, Jamie Lawson, Daniel Bedingfield, Tom Jones, Adam Ant, Paul Rogers, Hudson Taylor, and Gabriella Cilmi. Her EP ‘Fragile Heart’ is on the international British Airways playlist and Cafe Nero playlist.

Doctor da Vinci and his Elephant are a 4-piece indie rock act from London.

Their debut 3-track single “Mystery” can be heard on Spotify here:

Tate Marshall is an acoustic solo artist based in London. His percussive guitar skills and unique songmanship has amassed an online following of 15,000 Facebook followers and 400,000 music video views. After working and living on minimum wage, Tate quit his job, converted his room into a studio, and now dreams of getting to the top of the music industry. Tate Marshall writes his own music, records it, masters it, markets it and funds it himself. He is self-taught and brings an intense originality, talent and soulful experience to his music. There are no digitally made loops or drum machines. Just a man and his guitar.